FIFA World Cup is by far the most watched team sport event in the world taking place every four years under the banner of “FIFA”. Team across the world take part in regional qualifying rounds in a bid to qualifying for the actual tournament and for some being part of the tournament is achievement while other dream of lifting that beautiful gold trophy which comes with ever lasting legacy. Today we take a look at famous FIFA World Cup trophy, how it is made and who get to keep it. The most iconic trophy in all sports, The current FIFA World Cup trophy was introduced back in 1974 replacing the “Jules Rimet Trophy” which was introduced in the very first world cup 1930. According to earlier rules, any team who wins the world cup three times, get to keep the original trophy. Brazil became the first team to do so winning their third world cup in 1970 and FIFA handed them the original trophy which is now at the Brazil FA headquarters in Rio de Janeiro for public display. So after 1970, FIFA were suppose to make a new trophy and they changed the rules that regardless how many times a team won World Cup, New FIFA World Cup trophy will always stay with FIFA and only replica will be awarded to winning teams.

Trophy design & Material: Stabilimento Artistico Bertoni jewlery company from Italy were handed the task to make the new FIFA World Cup trophy in 1970 and they produced what became the most iconic trophies in world of sport. New trophy is made of 18-carat gold while the base of the trophy is made of malachite.

Trophy is just 36.8 cm in height however it quite heavy at 6.1 kg. Names of every winning team is engraved on the base. The original trophy is at the FIFA museum and every four years a replica is produce which is awarded to winning team.

Trophy Tour: The replica trophy go on a tour around the world months leading upto the world cup. It is showcased on the venue where the FIFA World Cup final is taking place during the whole World Cup month. 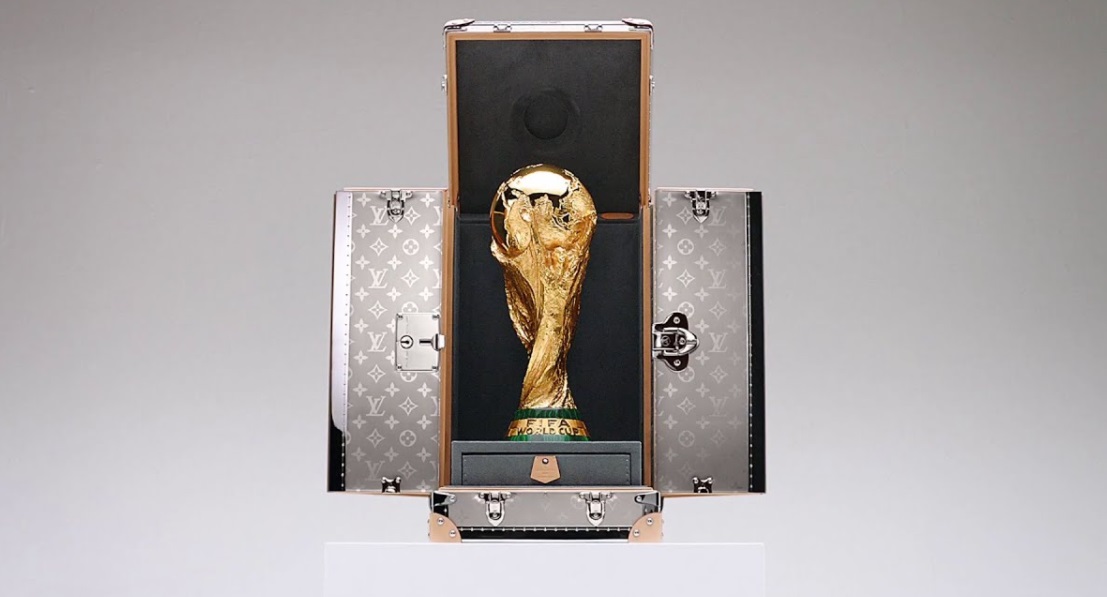 On the final day, Trophy is showcased at the sideline of the pitch throughout the match. After the final whistle, name of the winning team is engraved and trophy is presented to the captain of winning team.

The Original One (Jules Rimet Trophy)

Jules Rimet was the FIFA president who first proposed the idea of World Cup. The very first world cup took place in 1930 and Uruguay the winning team was awarded the very first FIFA world cup trophy which was at that time known as “Victory”. Victory trophy was designed by “Abel Lafleur” a French sculptor and it represented a goddess figure of victory. It was made of gold plated silver sterling with base coming in with white/yellow marbles. The trophy was 35 centimeters in height and it weighed at 3.8kg.